Manuel Georget and Vicent Duse speak to LVO about Platform 4, the position paper which they are presenting to NPA congress 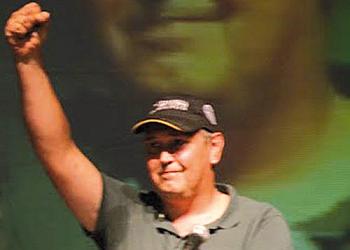 Manuel Georget and Vincent Duse are two of the most important workers’ representatives of Platform 4. Georget is general secretary of the CGT EGP Dreux and trade union delegate of the Philips Dreux TV manufacturing plant. The factory has recently been closed down after years of battle against layoffs and relocation, which ended with a short experience of workers’ control last January. Georget was a member of the Ligue Communiste Révolutionnaire (LCR), the forerunner of the NPA, for nearly 30 years. He headed the NPA slate in the Eure-et-Loir department in the last regional elections and is a member of the Collective for a Revolutionary Tendency (CTR) coordinating body. Duse is a worker at the Peugeot factory in Mulhouse, where more than 10,000 workers are employed, and for 10 years was the general secretary of the CGT in the factory. He is a member of the National Political Committee of the NPA and of the CTR coordinating body.

In February, the NPA will hold its 2nd Congress, the first one since its founding congress. Among the tendencies that are presenting alternative positions and texts for the Congress is Platform 4, which is promoted by the CTR, where the comrades of the FT-CI are active. Platform 4 was initially rejected by the majority of the leadership of the National Political Committee (CPN), with the accusation that it was against the founding principles of the party. It was eventually accepted at the last CPN meeting following a democratic campaign and expressions of solidarity by militants and high profile leaders, who rejected this attack on basic democratic rights, along with the shift in the political situation brought about by the powerful mass movement on the streets of France. It is a democratic and political victory for revolutionaries.

Quoting Pierre-François Grond of the National Executive of the NPA following the CPN meeting, the AFP press agency said: “A fourth tendency has been formed in order to ‘redefine the NPA as a revolutionary Trotskyist party’ around a Peugeot Mulhouse worker”.

LVO: You have presented a platform for the next NPA Congress. How was it formed and what is the difference between it and the other three platforms?

MG: We are militants of the NPA from different origins and most of us sided with Platform B in the national consultation in the party over the regional elections. It was the only platform that opposed the electoral agreements with the Left Front (Front de Gauche). At that time it was made clear that the problem went beyond the election issue and that what was at stake was the type of party we wanted to build. Given the failure in the discussions with Platform B and its unwillingness to go all the way in the battle against the project of building a “broad party” and to defend a truly revolutionary party, we decided to call for the creation of a revolutionary tendency, and the preparation of an alternative programme and orientation to those of the current leadership and the other three platforms that had been developed during the debate on the regional elections. We then called on all comrades who supported a revolutionary NPA to support this call, with the aim of moving forward so that the revolutionary tendency could become a political reality.

It was necessary to challenge the policy of the leadership and the right-wing elements of the NPA that were leading the party towards an impasse. It is necessary to carry out an ideological and political battle for the NPA to become a revolutionary party, a party that assimilates the tradition of the great revolutionary Marxist thinkers Marx, Engels, Rosa Luxemburg, Lenin and Trotsky, and to become a real tool in the hand of conscious workers in order to overthrow capitalism, destroy the state and form their own government.

V.D.: I was part of the group of members of the CPN who created Platform B. After a while, I was convinced of the necessity of building a revolutionary Marxist tendency within the NPA, but later I realised that the leadership of Platform B was not prepared to do that. All they wanted to do was form a ‘new majority’ by compromising with a section of the majority leadership. It was then that I decided, along with other comrades from Alsacia, to leave Platform B and build the CTR. After that I met the comrades of the FT-CI with whom we share many political views. They talked to me about their project of building a tendency with those who were already in the CLAIRE tendency, along with other workers and comrades like Manu, who committed themselves to such a project.

In my opinion, what differentiates us from the rest of the NPA platforms is that we are the only ones who fight openly for a working class and revolutionary party and reject the ambiguities of the NPA. This is why we have suffered so much repression from the leadership, which was on the verge of tearing up the statutes of the party and not ratifying our platform – something which they have no right to do, especially since I was a member of the leadership! In the end they were forced to ratify it, though this hasn’t stopped them carrying out a permanent campaign against us, accusing us of being hostile to the party.

LVO: We followed the events in France last autumn. What was your involvement and what assessment do you have of the movement?

V.D.: The first conclusion is that, quite apart from the immediate result of the conflict, the working class raised its head. Against the whole discourse of Sarkozy and the bosses, sections of the industrial proletariat like the refinery and port workers showed that, without them, the country could not work. And even though the government finally managed to get its reform through, thanks to the active collaboration of the trade union leaderships, this very important lesson, which allows for the beginning of a re-establishment of the confidence of the working class in its own forces, could not be wiped out and continues, including in the case of workers who were not part of the strike such as the car manufacturers. In Peugeot, it was surprising to see the extent to which the workers who did not strike were happy when we blockaded the whole plant for two hours. In the factories there is a new politicisation and a lot of discontent, above all among young people on flexible contracts. It is a time bomb which will explode sooner or later.

In this situation, a national party like the NPA could play a very important role if: 1) it were truly implanted in the areas where the working class is concentrated; 2) it had a clear programme to articulate the question of the national strike and political power; 3) it pushed for self-organisation in all areas, be they strike committees or General Inter-professional Assemblies. In conclusion, our assessment of the movement strengthens our resolve to fight for a working class and revolutionary party.

M.G.: In the Department of Eure-et-Loir, we have fought to set in motion a more radical tendency in the CGT, in opposition to the policies of the national bureaucracy. This tendency has managed to keep a certain pressure on the leaderships of the departmental trade union branches, who have been forced to support the struggles of the most radicalised sectors. For several weeks, we organised CGT Inter-professional Assemblies, blockades of industrial plants, free entry operations at toll booths, and the sending of delegations of workers to support other pickets like that of the Total refinery in Grandpuits.

A young comrade of ours, a secondary school student of the Revolutionary Tendency of the NPA Committee of Chartres, was at the head of the school students’ movements. She knew, in the context of the struggle, how to impose a political perspective and become the legitimate spokeswoman of the radicalised youth.

However, the crisis tells us that we should prepare for even more acute situations than those we have seen recently. In this powerful mobilisation, despite the fact that a political consciousness has begun to develop in the working class, we have so far not managed to make prominent the question of power and neither has a revolutionary situation developed. However, it is precisely for a revolutionary situation in the near future that we should prepare ourselves. This movement ended without either a real defeat for the working class or a real victory for the bourgeoisie, although the latter were able to count on the complicity of the trade union confederations which never condemned the police repression of the workers, the evictions from the refineries and the denial of the right to strike. They have never wanted to take sides regarding the question of the general strike – the only alternative which could lead to victory. The result of the war will be decided in future battles, and it’s necessary for our class to be equal to what is demanded. In this sense, the struggle against the pension reform, as a rehearsal, was not at all bad.

LVO: Europe is the epicentre of the contradictions of the capitalist crisis. After Greece and Ireland, we have seen Spain and Portugal appear this week on the front pages of the newspapers with their economic difficulties and the resistance of the workers. How does Platform 4 propose to confront this situation?

M.G.: The situation in Europe is very serious. In particular, after the protests in Greece, France and Spain, it’s necessary to pay close attention to the political situation in Europe, the analysis of the developments of the crisis in the EU (the bailout of Ireland, fragility of the Portuguese economy, etc.) and the new attacks which are beginning to appear (measures of technical unemployment in France once more, etc.).

The big capitalists, who are organising an attack on all the social and democratic conquests at a continental level, continue to impose sacrifices on the workers: everything is going into the meat grinder with the aim of producing ever more juicy profits for the tiny minority which is strangling the working class. The epicentre of the crisis is Europe and as it spreads here it threatens to extend to other continents. In the face of this expansion, be it in Europe or elsewhere, the workers and youth will rise up.

However, in order to struggle and win against capitalism and the bourgeois states, the workers need to acquire a class consciousness – which is to say the consciousness of their role in society as conceived by Marxist theory – and take confidence in their capacity to organise society, without subordinating themselves to the dominant class. It is in this direction that we want to push the working class so that it can face up to this situation. This is the meaning of our struggle within the NPA.