In recent years, Greece has been the setting of the most brutal austerity measures, but also of enormous resistance on the part of the workers and the people, who have carried out more than 15 general strikes in 24 months. Despite the policy of the union leaderships, linked to PASOK (the Socialist Party), that only called for isolated actions, signs of workers’ response and organization against the attacks have begun to appear. The workers of the steel mill Jalivurguía Ellados (the biggest in the country) have spent five months on strike, in protest against 93 layoffs and the attack on their working conditions.

In Kiklis, the workers of the general hospital of that city have occupied the health center and have set it up to function under their control, against the cutbacks and austerity measures. In Athens, the working men and women of Eleftherotypia, Greece’s second biggest daily paper in circulation, have been on strike since December 22, and they decided to occupy the plant and begin to publish a paper of their own. With disparities, since some occupations are more radical, and others seek to develop a more cooperative model, these initiatives of the workers show the climate that the country is experiencing. If these tendencies develop and are coordinated, the Greek workers would take a big step in showing in practice how to give a solution to a crisis that will be in favor of the workers and the people, and not of the bankers and capitalists. Below, we present an interview of Konstantina Daskalopoulou, a journalist of the Greek daily paper Eleftherotypia; the interview was carried out by Stefan Schneider of the Berlin RIO group, a sympathizing section of the Fracción Trotskista – Cuarta Internacional in Germany. 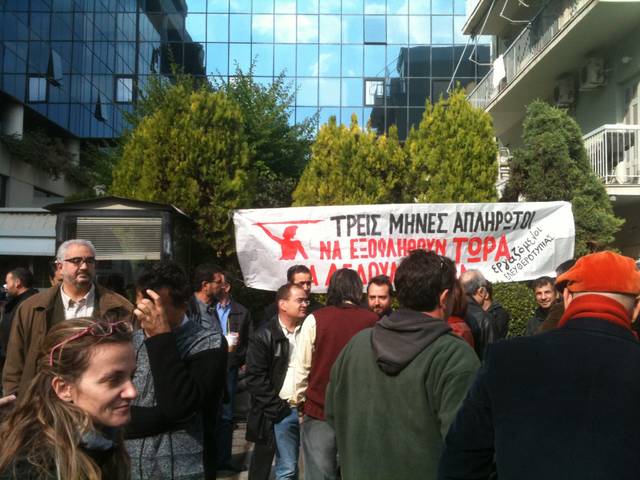 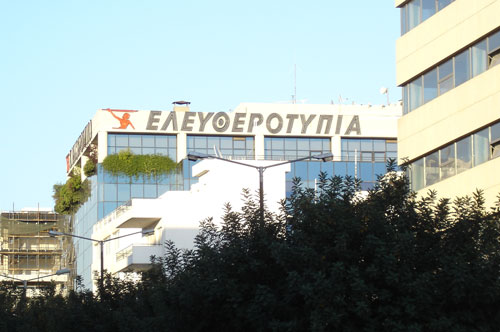 Interview with Konstantina Daskalopoulou, journalist at the Greek newspaper Eleftherotypia

RIO: Dina, you work for one of the biggest newspapers in Greece, Eleftherotypia, which has been hit hard by the current crisis. How did that affect your working conditions?

Dina: We have not received our wages since August. In order to support the newspaper, we continued working for several months without pay. But at some point we just couldn’t take it anymore. They just want to pressure us into accepting large wage cuts. And so, on December 22nd, we went on strike indefinitely. In order to survive, we have been supported by a solidarity network helping us out with food or monetary donations. But the strike didn’t change the minds of our bosses, and so we have decided to produce a strike newspaper, The Workers (of Eletherotypia), under our own control, to be able to continue to finance our strike, but also to not lose contact with our readers, and because we wanted to speak about the struggle of all Greek workers. Greece is now like an experimental ground for neoliberalists. And a war field for all of us.

How does the production of the strike newspaper work?

First of all, we have a regular general assembly which makes all the decisions regarding the strike. All 870 employees of the newspaper – cleaning staff, journalists, printers – have one vote each, which also established a new kind of solidarity among the workers which hadn’t existed before. To execute the decisions of the general assembly, we voted a workers’ committee which consists of 15 members (of which unfortunately only 3 are women) with a direct mandate which is revocable at any time by the general assembly. This committee is in charge of staying in contact with our lawyers, our solidarity network, organize talks etc..

When we decided to publish our strike newspaper, we also founded a newspaper committee that is in charge of editing the issues that we produce. So far we were able to produce two issues of The Workers. The first one was published with the help of journalists, photographers and printers who worked for free to be able to produce the issue. We sold more copies of the first issue than any other newspaper in Greece, and that only with the help of our solidarity network and social media. With the income from that, we could produce the second issue and help finance the strike. We don’t have any advertising, and we can’t use the infrastructure of the company, because when they heard we were producing a strike newspaper, they first turned off the heat, denied us access to our publication system and then locked us out of our offices. But with the support of our solidarity network, we could prove that we can make a newspaper without our bosses.

What kind of debates do you have among the workers of the newspaper?

The general assembly, in which usually 150 to 550 people participate, doesn’t only talk about the strike, but also about politics in general. The sessions are usually very long, but this gives us time to express our opinions and really reflect on our situation and our possibilities for action. Not only about our own professional future, but about how we want newspapers to be, how we want our lives to be.

This debate is very open. There are still some workers who support our boss or who think that we should just make a monetary settlement with them and give up, or who want to find a new boss. And then there are some crazy people like me who say that we should push for workers’ control of the newspaper. Most support the idea that we should go a legal route and pressure our bosses into signing over the newspaper to us. But some, like me, go further and say we should occupy the newspaper and take up production under our own control, no matter what the bosses say.

The people arguing for workers’ control were a small minority in the beginning of the strike, but not anymore. Not because all of a sudden we have become revolutionary, but because workers’ control has become a necessity for us, the only way of surviving. Most of us are not revolutionary. Until a couple of months ago, we were living normal, middle class lives, and then everything “exploded”. We live under extreme circumstances, which makes our solutions extreme, too.

What does the experience you’re having at Eleftherotypia mean to you?

We are capable of making all of our decisions ourselves. We proved that we can run the newspaper without our bosses, in a democratic way. This entire experience is a new process in Greece. Before, we would vote for a trade union leadership every two years and leave all the decisions up to them. Now we know we can take our lives into our own hands.

This orientation is not common in the Greek left. The biggest party left of the Social Democracy (PASOK) is the Communist Party of Greece (KKE), which doesn’t care at all about us. They do support other strikes, like the one at Hellenic Steel which has been going on for more than 5 months as well, but they don’t start a conversation about how to continue, they don’t want to talk about workers’ control, because they fear they wouldn’t be able to control it. But there are some parties of the radical left in Greece that do support us. SYRIZA is one of them, but they are also divided in their perspective. In my opinion, Greece can’t overcome the crisis on a national level. Our fight cannot be won in Greece alone. We need an international perspective to combat the so-called “solutions” that the capitalists all over Europe propose. We need international solidarity and a common struggle which can both show us solutions to our everyday problems and a perspective for how to make the capitalists pay for their own crisis. Just like they don’t have a fatherland, we don’t either.