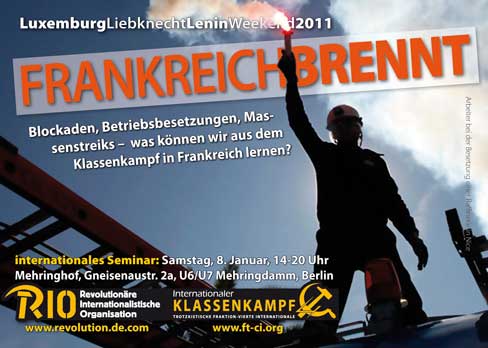 The bourgeoisies across Europe are imposing austerity programs on the workers and youth, and Germany is no exception. But due to the momentary strength of German imperialism, which was able to bolster its position at the expense of other imperialist powers, and with the active support of the trade union bureaucracy, the struggles against this program have so far been limited. In this framework, it is important for revolutionaries in Germany to learn from the class struggle in other countries. With this objective, 40 people gathered at the international seminar of the Revolutionary Internationalist Organization (RIO) and the Trotskyist Fraction – Fourth International (FT-CI) on January 8 in Berlin.

The seminar began with a discussion about the ongoing strike at UPS in Turkey. Victor Jalava (RIO) from Berlin began by explaining that this strike was part of a general rise in workers’ protests in Turkey in the last 1-2 years, based on rapid economic growth on the one hand and deep divisions in the ruling class on the other. This rise is of particular importance for the proletariat in Germany, which includes millions of workers from Turkey and Kurdistan. It appears that the six-month strike at UPS will end in a victory – during the seminar we received the news that the UPS management had agreed to re-hire 151 workers (all but 11 of those fired) and pay them their wages for the period of the strike. The discussion focussed on the importance of international solidarity work – in this case supported by RIO in different countries – to beat a global corporation like UPS.

Then there were short presentations on the class struggle in the Czech Republic, Great Britain and Germany. Roman Novotny (RIO) from Prague analyzed the Czech workers’ resistance against the right-wing government, with a surprisingly large trade union demonstration in September but a disappointingly small public sector strike in December. James (Permanent Revolution), a worker on the London underground, spoke about the protests against the cuts, including massive and militant students’ demonstrations and lots of heated rhetoric from trade union leaders, but still very little in terms of actual strike action. Leon Fädler (RIO) from Munich spoke about the situation in Germany, where despite brutal attacks on the weakest sectors of the working class, the protests have been small compared to other European countries. This is because the social democratic trade union leaders don’t want to organize any kind of struggle, and the radical left is isolated from the working class (and in many cases not even subjectively oriented to workers).

But the most important discussion of the day focussed on the strike wave in France in late 2010. The seven weeks of strikes and demonstrations against the pension reform, including blockades of refineries, occupations of schools and tendencies towards a general strike – protests which cost the French bourgeoisie between 200 and 400 million euros per day! – represented a new quality in the resistance against austerity programs, a “U-turn for the class struggle across Europe”, as Jean Baptiste (FT), a teacher in a Parisian banlieu and member of the Revolutionary Tendency (Platform 4) in the New Anticapitalist Party (NPA) explained in his speech. The movement also represented a new quality in comparison to earlier protests in France in 1995, 2005 or 2006: the movement united public and private sector workers with students and oppressed youth, the working class developed some forms of self-organization and the masses expanded the traditional slogan “tous ensemble” (all together) with a second, more important line: “grève générale” (general strike).

Manuel Georget, a worker at the Philips factory in Dreux and also a member of the Revolutionary Tendency of the NPA, was unable to attend the seminar due to the preparations for the NPA congress in February. In written greetings, he noted that many activists in Germany say that the workers and youth need to “learn French”. But French, he explained, can be spoken with many different accents: Speaking French with the accent of the trade union bureaucracy can only lead to demobilization and defeat; but the accent of the vanguard sectors of the working class can be spoken – and can lead to victories – everywhere.

The discussion about France focussed on the tendencies towards self-organization in the form of the interprofessional assemblies (”Interpros”). There was an important debate with comrades from the Fraction de Lutte Ouvrière (”L’Étincelle”) about the meaning of the Interpros, which despite their small size represented a step towards workers’ self-organization in important concentrations of the proletariat. We believe that the differences of analysis and characterization between FT and RIO on the one hand and the LO Fraction on the other expressed in this discussion are of strategic importance.

There was also discussion about the inadequacy of the two large organizations of the radical left in France, the NPA and Lutte Ouvrière (LO). These organizations could not present an alternative to demobilizing and demoralizing politics of the trade union bureaucracy, either because of their refusal to criticize the bureaucrats (in the former case) or because of their conservative insistence that their were no tendencies towards a general strike (in the latter case). Against these adaptations, the comrades of the FT are fighting to build up a strong revolutionary tendency within the NPA, with a clear revolutionary strategy for the working class and youth based on an update of the transitional program. As was explained at the seminar, this program still expresses the main tasks for revolutionaries today, such as the struggle against the trade union bureaucracy and for the self-organization of the working class to prepare future struggles against the attacks of the bourgeoisie.

After three hours of discussion about France, the seminar was followed by a concert with three revolutionary rappers: Lea-Won and Crument from Munich, and Cien from Santiago de Chile (from the group “Legua York”). The concert ended at 1am so participants could sleep before the traditional demonstration to commemorate the 92rd anniversary of the murder of the founders of the Communist Party of Germany, Rosa Luxemburg and Karl Liebknecht. At the demonstration, which began on Sunday at 10am,we participated in a Trotskyist block. Now the task is to use the lessons from the seminar to build up strong revolutionary organizations.