Argentina: Christian Castillo, national leader of the PTS, made a statement after floods 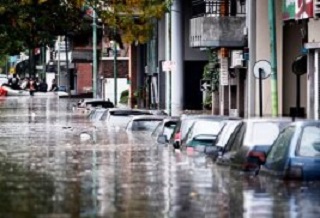 (PTS, April 3, 2013) Christian Castillo, national leader of the PTS (Partido de Trabajadores Socialistas), made a statement after floods caused chaos in parts of Buenos Aires City and Buenos Aires province. The southern cities of Tolosa and La Plata have been inundated after more than 30mm of rain fell within a 20-hour period. Castillo said: “This is a new social crime against working people and the poor. As a result of the torrential rain there have been 48 fatalities reported, dozens of people are missing and hundreds of thousands have lost their belongings. This is a crime: these deaths were avoidable. Severe weather was forecast and heavy rain was expected. However, nothing was done to prevent its harmful effects because the government had not invested in much-needed and urgent works to alleviate the collapse of structured in the areas affected. As the PTS and the Left Front (Frente de Izquierda) have said in the past, in ten years of record economic growth no infrastructure to serve the needs of working people has been built. This explains why the poor sectors of the population are the victims of this disaster. Meanwhile, the government has paid out thousands of millions of dollars of foreign debt and there are still many entrepreneurs making huge profits and tens of thousands of government officers receiving wages that are ten times higher than any worker.”

Workers on the Buenos Aires underground system have gone on strike after a Line B worker died as a result of the flooding. Castillo said: “Subway workers, led by the workers of line B, voted in an mass meeting to stop services in protest at the death of one of their colleagues, who was electrocuted due to the appalling working conditions imposssed by the company Metrovías and the national and local government. Our comrade Claudio Dellecarbonara said: “We will fight for the politicians and bosses responsible for this crime to be punished.”

Finally, Castillo said: “We are not surprised by the inadequate response given by the national, city and provincial government; they are responsible for this situation. The chaos could have been avoided had they invested in works and maintenance and had they not privatised the electricity supply industry and the underground railway.” He added: “It is touching to see the extent to which relatives, neighbours and friends of the victims are helping out in the hope of mitigating the disaster. Tens of thousands of families are left with nothing. Workers, trade unions and students in schools and colleges should organise a solidarity network to provide assistance to the victims. Workers who are forced to take time off work because of flooding should not have their wages docked. National, provincial and city government should compensate those families affected by setting up a special tax on the big capital and bankers.