(PTS. March 27, 2013) On March 24, there was a demonstration in Buenos Aires to mark the 37th anniversary of the military coup in Argentina. Like every year, the human rights umbrella organisation Encuentro Memoria, Verdad y Justicia (EMVJ) (Encounter Memory, Truth and Justice)– an umbrella group that brings together dozens of human rights organisations, trade unions, students’ organisations and left-wing parties – called to march to Plaza de Mayo Square. This year, organisations close to the government mounted a provocation by sending a gang of thugs to prevent the EMVJ from entering the square and criticising the government. 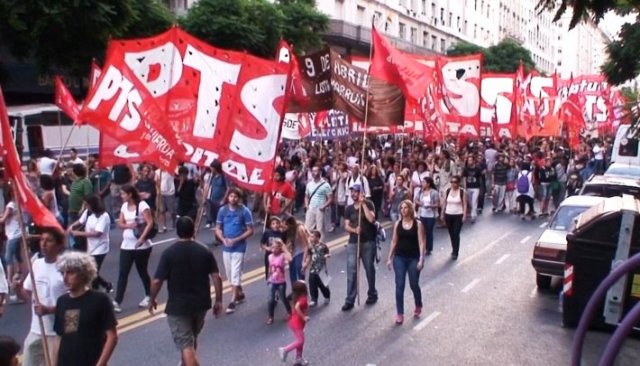 After some scuffling, it was clear that the provocation mounted by organisations close to the government failed and the EMVJ managed to enter the Square and organise its own rally condemning the ever-present impunity.

Days later President Fernández de Kirchner, attacked the left posting on her twitter account that: "On March, 24 in the Square, people wearing red uniforms, so called left-winners, were armed with sticks in a threatening attitude.” “On the other side, young people wearing blue, pale blue and white, with Argentinean flags, holding their hands together, formed a human chain in order to prevent a fight."

Facing this liars and slanders, Christian Castillo, leader of the Partido de Trabajadores Socialistas (PTS) issued a press release clarifying that the thugs were part of pro-Kirchner organisations, as anyone can see on the photos and videos attached. Christian Castillo said: "the president’s statements are completely false and are an attempt to covering for the thugs working at the orders of the Kirchnerism. The thugs are known for harassing workers at the institute of Statistics (INDEC) which was intervened in order to cook the numbers and hide the real inflation figures. [1]"

Castillo explained: "In previous days, representatives of the human rights movement Encuentro Memoria, Verdad y Justicia, had publicly denounced the attempt by the government to prevent the access to Plaza de Mayo of the traditional rally called by EMVJ.We had even requested an audience with the national government in order to reach an agreement so that both, the official act called by the government and the one called by the EMVJ could take place on the same day. But the government didn’t grant an audience. The attempt to prevent the entry of the column of the EMVJ finally took place in the afternoon, when pro-Kirchner organisations occupied a couple of blocks surrounding the Plaza de Mayo Square, forcing the demonstrators marching behind the banner of EMVJ to alter its traditional route. At arriving at the Square, our column met the "block" composed of thugs of the groups “Campora” and “Pueblo Peronista”. Among them we identified some members of the gang of thugs who are known for harassing INDEC workers who condemn the government’s interventionin the institute in order to cook the books to change inflation figures. This group of thugs is known as "The 12 apostles of Moreno" (Guillermo Moreno led the assault on INDEC in order to fiddle the figures to change inflation figures")

Castillo concluded: "The mobilisation entered the Plaza de Mayo Square around 6.30pm, after defeating the provocation mounted by the government aimed at preventing the EMVJ from condemning impunity and repression of yesterday and today, and the espionage of activist by the National Gendarmerie."