Zanon: A factory without bosses

Raúl Godoy is a Zanon worker, a leading member of the PTS and Provincial Deputy in Neuquén from the Workers’ Left Front (FIT) in Neuquén, Argentina. The FIT is composed by three Trotskyist parties, the Lista Marrón (a ceramist workers’ trade union list) and the Ceramist Workers and Employees’ trade union (SOECN) from Neuquén.

Argentina, 2001: A deep economic crisis striked the country. Unemployment reached record levels; health care and education budgets were savaged. The measure to freeze people’s savings showed how bankers ripped off small savers. Thousands of factories closed, and workers were fired. President de la Rua was overthrew during a great political crisis after thousands of protesters took the street claiming “All of them must go”. Neighbors set up “popular assemblies”, joined forces with the “piqueteros” movement and other organisations of unemployed workers and blocked streets and roads.

Facing massive closures, a movement of recovered factories emerged. In the south of the country, Zanon –the largest ceramics factory in South America is occupied by its workers and put to work under workers’ control.

Factory under workers’ control: The factory belongs to the people

Raúl Godoy said: “Zanon’s struggle was a class response against the Argentinean capitalist crisis, which in those years sent to bankrupcy almost two thousand factories. Our experience is a small example of how workers are able to solve closures. Capitalists must pay the crisis.””

Zanon factory, under workers’ control created hundreds of new jobs, which were democratically distributed among local organisations of unemployed workers. Zanon was a workers’ school of planning, organising the production in assemblies with the participation of delegates from all sectors in the production line. Thus, under the slogan "if they touch one of us, they touch us all", Zanon workers coordinate their actions with other workers’ struggles and forged bonds of solidarity with students, the Mapuche indigenous people, artists and youth. The Workers’ campaign in favour of expropriation and nationalisation under workers’ control - in order to benefit the people of Neuquén - became deeply popular. Examples like this showed that workers can put factories at people’s service. Donations were made to schools, and medical facilities where built in poor neighborhoods. Dozens of crowded concerts were performed in the forecourt and artists like SKA-P and Manu Chao performed in solidarity. The statutes of the ceramist workers’ trade union (SOECN) were improved. The new statue establishes that once the term is completed a leader must get back to his o her post. Over 11 years, the workers of Zanon faced hard struggles and police repression in many opportunities. Finally, in 2009, the factory was expropriated but the fight for nationalisation under workers’ control still remains.

A tour to exchange experiences
Activities and meetings in France, Greece, Germany and the Spanish State

Raúl Godoy will be attending meetings and participating in debates and rallies with workers in struggle in France, Greece, Germany and Spain.

Godoy will be attending a rally in Barcelona on May 14, and next day the Confederate Committee of the CGT of Catalonia visits to a couple of factories where Raúl will have the opportunity to speak with workers have been arranged. FICOSA, a Catalan automotive parts factory that is being sold to SONY and restructured, will be expecting Raul’s visit. Workers at this factory have called demonstrations against a labour regulation. Godoy will visit the car factory SEAT, the largest factory in Catalonia, with over 15,000 workers, and will attend a meal with CGT delegates later. Finally, he will be visiting colleagues from FUNOSA iron foundry, an well known factory in one of the most deprived regions of Catalonia. Workers from FUNOSA, led by delegates from the CG, who have a majority in the Enterprise Committee, have tried to take over the facilities and the production management twice already. FUNOSA workers will have the opportunity to share their experience with Godoy, and to hear about Zanon’s experience at first hand as well.

Godoy will be attending a conference-debate organised by the NPA, followed by a visit to the Citroen Aulnay Factory, where workers have been in strike for four months. Then, Godoy will travel to the Goodyear factory in Amiens-Nord in order to express his solidarity with the workers at the plant who have been fighting against the closure of the premises for months. The workers in this factory are discussing the possibility of forming a cooperative and taking the factory under workers’ management. On May 18-19, Raúl Godoy will be in Lutte Ouvrière, an event that brings together thousands of members and supporters of left political parties and trade union activists from France and other European countries and will be giving a talk about Zanon on Sunday, at 1 p.m. in the Cité Politique. 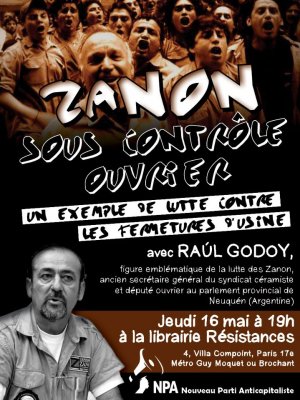 After visiting France and the Spanish State, Raúl Godoy will be visiting Greece to attend several meetings and public events with workers in struggle, activists and several organisations. On May Day, the second general strike in 2013 against the government cuts took place. Hundreds of thousands of young people and Greek workers protested against austerity measures and the high level of unemployment. The situation in Greece is expected to get worse because under the new reforms approved by the Greek parliament on Sunday, 15,000 public jobs will be cut over the next two years, among other measures. In this convulsive scenario, Godoy will participate in a rally and several meetings with Greek workers and youth in Athens. He will be travelling to Thessaloniki to visit the workers of Vio.Me, a factory of construction materials that is currently under workers’ control. He will be finalizing his tour in Greece with a rally in Thessaloniki.

The last stop in Godoy’s European tour is Germany. There, the group RIO, Revolutionären Internationalistischen Organisation, is organising a lecture in Berlin with the aim of sharing Zanon’s experience with a group of young activists and workers.

We wish Raúl to have a very successful and fructiferous tour.