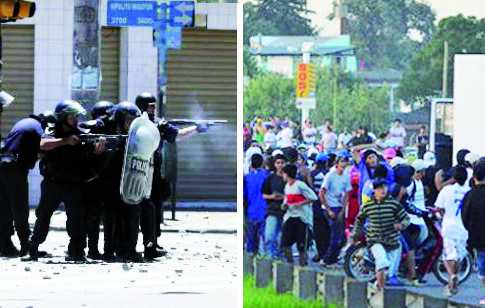 (PTS, December 21, 2012) In view of the actions that happened in Bariloche, Rosario, and some areas of Greater Buenos Aires, where instances of looting supermarkets and other businesses occurred, the PTS charges, in the first place, that these acts are the result of the fact that, under the administrations of the Kirchners, a large part of the population, mainly young people, continues to live under conditions of extreme poverty, without work or working under the table and with precarious employment. Ten years into the greatest economic growth in the entire history of the country, according the same official figures, there are, in Argentina, more than one and a half million unemployed and almost five million have precarious employment, “under the table,” while a million young people are neither studying nor working. This is aggravated by inflation that increases the high cost of living and affects, in the first place, the poorest groups, while businessmen and bankers continue with the party, making money for themselves, as President Cristina Fernández herself admitted. While, at this time, luxury products are being sold wholesale in the malls for a few people, in the poor neighborhoods, the increasingly brutal social differentiation that this “national and popular model” has produced, is obvious.

We reject the repression against people that are reaching this desperate situation, and we demand the release of all those arrested. We also repudiate the McCarthyite statements of the national officials, headed by the Cabinet Chief, Juan Manuel Abal Medina, and the Secretary of Security, Sergio Berni, again accusing social, union and leftist organizations and calling for repression.

The PTS does not promote any looting, and it defends the historic methods of struggle of the workers’ movement, at the same time that it understands the situation to which thousands of indigent families of our country are pushed, that leads them to take these desperate actions.

In the press conference of the CGT and the CTA, in opposition, Moyano and Micheli condemned the campaign of lies generated by the Kirchners’ government and its immense media corporation. But, consistently with the traditional position of the bureaucratic union leadership, that in the 1990’s left, abandoned to their fate, millions of the unemployed, who found themselves forced to develop the piquetero movement, this time also, those who are leading the unions are turning their backs on the most exploited and oppressed groups in society, like the millions of unemployed workers and those with uncertain employment. In the press conference cited, remarkably, no one mentioned the extreme fare increase in transportation that the Kirchners’ government has just imposed, a new attack on the standard of living, particularly, of the most impoverished groups of working people. The union bureaucracy is also responsible for the powerlessness of these groups of the poor.

In the Left Front, the PTS maintains that we must get the struggle for food and housing back on track, by directing it towards political power and demanding an immediate end to repression and the release of all prisoners; immediate delivery of big bags of food in all the disadvantaged neighborhoods of the country, under the control of democratically elected neighborhood delegates; cancellation of the extreme fare increase in transportation; a national plan of public works under the control of the workers’ organizations to carry out the infrastructure projects that the people need, by putting hundreds of thousands of workers to work, with a minimum wage that will be equivalent to the cost of a family food basket; trial and punishment of those responsible for the murders in Rosario.