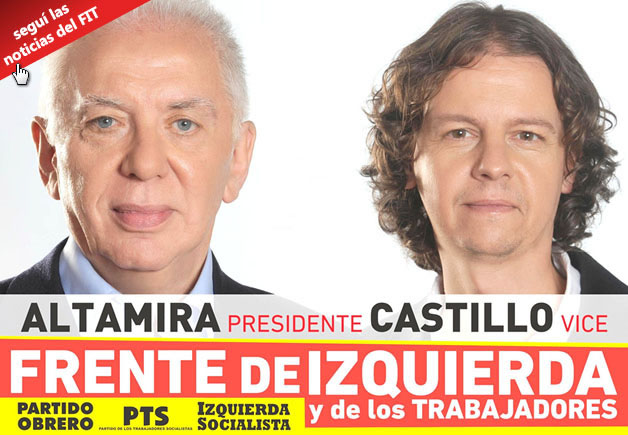 (Buenos Aires, August 14, 2011) Christian Castillo, a leading member of the PTS and Vice-presidential candidate for the Workers Left Front, stated that “in the context of a conservative election, where the working population has chosen to back the government as a lesser evil to the bosses’ opposition candidates, we received massive support from workers and young people in these primary elections. The projection made by the official electoral authorities shows that we will surpass 500,000 votes. We have achieved a big increase, compared to the total of 200,000 votes received by the component parts of the Front in the 2007 Presidential elections, and the 400,000 received in 2009. We know that a large number of our supporters agreed with our condemnation of the new electoral law approved by the Kirchnerites and Radicals which bans small parties from taking part in elections if they do not obtain at least 1.5% of the vote in the primaries. We will continue fighting for the repeal of this law, which has already led to the Proyecto Sur being unable to stand in the October elections.

“From now to October, the Front will carry out a major campaign on the same socialist and anti-capitalist programme that we raised during the campaign for the primaries. Our programme is the only progressive response to the crisis that is worsening internationally, and that will inexorably affect our country. We are the only ones who are demanding that the bankers and the big monopolies must pay for the crisis.”

He went on to say that “the projections show that we will get 80,000 votes in the Capital and around 60,000 in Córdoba, where our candidate, Hernán ‘Bocha’ Puddu, a well-known trade union delegate for the opposition in the car workers’ union, got more votes than Omar Dragún, the SMATA bureaucrat who headed the list of De La Sota’s Justicialist Party, in the election of Córdoba City. We had excellent results in the Province of Buenos Aires, exceeding the required minimum in almost all categories, very good results in Salta, and we are forecast to obtain 25,000 votes in Mendoza. In Neuquén, the Front obtained 15,000 votes, more than in the provincial election when we got a deputy. We are projected to exceed the threshold in Jujuy, La Pampa, Tucumán, Santa Cruz and other provinces. Our greetings and thanks go out to all the brothers and sisters who have voted for us, to all members of the parties that make up the Front, and to the hundreds of independent activists who have campaigned alongside us. Without them, this victory would not have been possible. It strengthens us in our commitment to every struggle of the working class and the oppressed, and we know that all those in struggle will consider this victory as their own.”