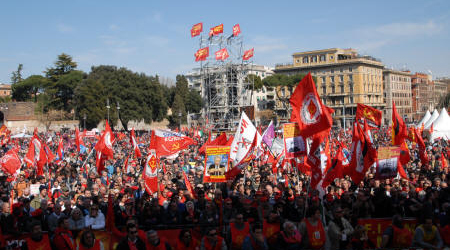 50,000 workers and students mobilized on Friday, March 9, in Rome against the Mario Monti government’s labor reform. This big workers’ mobilization took place in the context of a strike by the big Italian metal workers’ branch, organized in the metal workers’ federation (FIOM), the country’s biggest union. The labor reform that the big employers (FIAT, among others, that wants to close factories, leaving hundreds in the street) are promoting, is an attempt to get rid of the famous Article 18, an historic achievement of the proletariat, that guarantees stable work. Monti, who was not chosen in elections and has no political commitments, is exclusively dedicated to "adjusting" the economy. This "technocratic" government is a result of the enormous financial and economic crisis that the country is going through and the resistance by the masses to the austerity plans of Berlusconi, who found himself forced to resign after the big October 2011 mobilizations, and the enormous loss of prestige, that weighed heavily on his corrupt government. Monti has been implementing cuts of more than 50 billion euros, that Berlusconi got approved before leaving, and now he is trying to advance further with this extremely tough labor reform. Because of that, the metal workers’ strike, that had a lot of support throughout Italy, and the tens of thousands who mobilized, have become very significant in the struggle against the government and the big employers, who want to impose austerity on the workers, in order to increase their own profits.