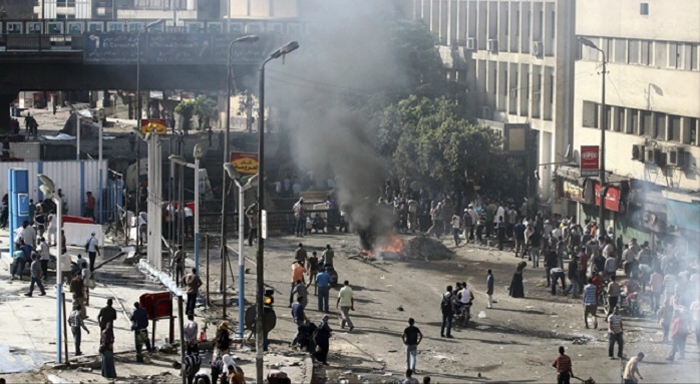 An essential contribution of the Marxists to the cause of the Egyptian and Arab revolution is helping clarify the problems that it confronts and the means for its victory, which puts a central problem on the table: How can the Arab peoples in struggle achieve bread, work and freedom? Is real democratization possible, without the seizure of power by the workers? Unfortunately, groups of the socialist left are imagining a phase of "democratic revolution," prior to and separated from, the seizure of power by the workers, which has extremely serious political consequences. For example, the LIT-CI, the tendency led by the PSTU of Brazil, talks about the "great conquest of the masses," – a big step forward, of their "democratic revolution" – while the soldiers are carrying out a coup, massacring, imprisoning, imposing the state of emergency, and advancing in attacks that aim, not only against the MB, but against the entire revolutionary process.

According to the LIT, there is an advance of the revolution, "however much the contradiction is posed that if the military upper echelons directly take the reins of power again, it will be a new victory of the masses of the people, partial but extremely important, since they will have dealt another blow to the military regime, although it will not destroy it," [1], "despite this contradiction, Morsi’s downfall is taking shape as a big conquest of the masses and a new blow to the regime, that lost its second government in two and a half years, beginning with the popular mobilization." How does the LIT explain the fact that this "big conquest of the masses" has led to the imposition of a military government and to the worst massacres, that have not been seen since the epoch of Mubarak?

Following this logic, the LIT-CI places itself in the "democratic camp," in the name of "the broadest unity of action," including the liberal and secular bosses’ politicians, against the "Bonapartists," whether Islamic or soldiers. Through this surrender to the "liberal" forces, the paradox arises that the LIT, while talking about the "democratic" revolution, concludes by conceding to the soldiers and their government, allies of imperialism and of Israel, a legitimacy for repressing the Islamists. It is unusual that an organization that claims to be leftist, would suggest that government repression was "unrestrained and completely out of proportion against the militants of the Brotherhood" ... and that if the army only wanted to repress the Muslim Brotherhood, "Massive arrests or, at least, arrest of all its leadership, would suffice. Nor would it be necessary to declare a state of emergency (of siege), nor a curfew, since it would be sufficient to ban the Brotherhood." At the same time, it is asking (the soldiers? the liberal allies of imperialism?) that "no democratic right, nor the right of expression" be granted "for the Brotherhood and its political leaders, while they are mobilizing for Morsi’s return" (sic). It seems unbelievable to have to remind the comrades of the LIT of something so elementary for a revolutionary: that it is one thing for the masses to defeat Morsi’s reactionary government, and something very different if the one that does it is the repressive forces of the capitalist state, whose aim is to liquidate the process as a whole. At the same time, their slogan, "Immediate elections for the free and sovereign Constituent Assembly, without the participation of soldiers or of the Brotherhood!" [2] which conveys their adaptation to the camp of the bourgeois secular, liberal and nationalist tendencies, cannot fail to attract attention.

The policy of a "democratic revolution" has already led the LIT and other organizations of the international left to consider that the downfall of Gaddafi in Libya, under the leadership of NATO and its local collaborators, was a "big victory" of the masses. Now, in Egypt, it is leading them to capitulate to the "democrats" that are covering up for the military.

After two and a half years of upheavals and struggles by the masses, of every sort, in the Arab world and in Egypt, they show that the utopia of a phase of "democratic revolution," that changes the political regime without power passing from the hands of the bourgeoisie to the hands of the working class and the oppressed, is incorrect. There is no other way of satisfying the profound demands of the masses and entirely and really resolving the democratic and national tasks than the seizure of power by the workers, at the front of the workers’, peasants’ and popular alliance.