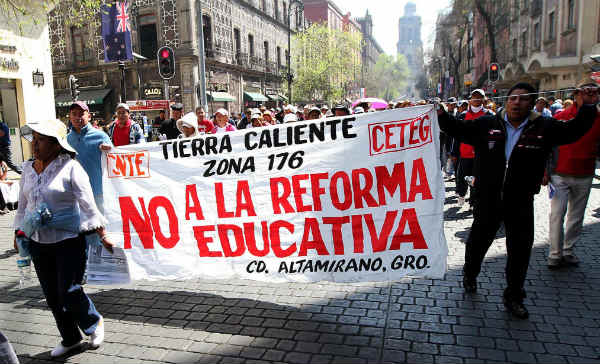 The PRI government, headed by current president Enrique Peña Nieto, is pushing to impose, at all costs, an educational reform that seeks to advance the privatization of education. The reform would entail the elimination of labor gains by enforcing teaching evaluations standards created by private companies, the closing of Normal Schools (Teacher training college), and the disregard for the norms and customs of 10 thousand native teachers. Despite the government’s objectives, the CETEG (State Coordinating Committee of Educators in Guerrero) continue to protest.

In Guerrero, one of the poorest states in the country, thousands of teachers have remained on strike since last February 25th and have held numerous marches and sit-ins. In addition, as part of the fight against the reform, teachers have blocked roads as well as taken over public buildings, shopping centers, and tool booths. The teachers that are organized in the National Coordinating Committee of Educators (which, at the same time is the organizartion that is in opposition to the SNTE [1] official direction), whom the CETEG also supports, are mobilizing in other states such as Michoacan, Oaxaca, and Chiapas.

The CETEG has called on the government and the local Congress to discuss a counterproposal, which is a reform created by the teachers, and, warning that without approval, they will continue demonstrating and demand the removal of certain political powers in the state led by Angel Aguirre Rivero, member of the center-leftist PRD. On their own behalf, the Oaxacan teachers are demanding a solution similar to that proposed by their counterparts in Guerrero.

The federal government’s position is inflexible, holding true to Peña Nieto’s commitment to imperialist organizations such as OECD (Organisation for Economic Co-operation and Development) and domestic and foreign companies. In exchange for the support that they provided to Nieto’s candidacy in the presidential elections last year, he assured the implementation of the so-called “structural reforms” against workers and the people.

At the same time, the government will not give in to the magisterial dissent when it is trying to reinforce their control over the SNTE (The largest union in Latin America), which, up until recently, had been led by the bureaucrat Elba Esther Gordillo; since she was no longer needed by the State and the company owners, Gordillo was incarcerated on accusations of money laundering and embezzlement of union dues.

The authoritarian, Peña Nieto, is using Federal (Riot) Police to curb the demonstrations (like Autopista del Sol on April 5 [2] ). On their own behalf, employers, the media, politicians, and intellectuals of the regime are calling for repression, as was seen during the worst moments of the PRI rule. However, the teachers are not intimidated.

The Oaxaca teachers are also mobilizing, announcing a march/caravan to Guerrero on April 18 in solidarity with their peers. At the same time, the Chiapas teachers will discuss a work stoppage during their sectional congress on April 19, which is also being discussed by other sectors of CNTE that are looking to propel a national strike of educators.

The discontent of the teachers is national; nevertheless, in most of the unions controlled by the National Union of Educators, the union leadership has prevented many teachers from joining the struggle because in doing so it would weaken the union bureaucracy.

So far the threat of increased repression - at a time of great national unrest, including in regions where the drug traffickers operate beyond the government’s control– appears to be contained by the negotiations with the teachers in the Guerrero and Oaxacan congresses (where the PRD has a greater influence). However, even if local lawmakers accept the initiatives proposed by the dissident teachers, this negotiation would still allow for Peña Nieto’s education reform to be implemented.

The popular discontent created by the government offensive has found new ways of organization in the recently created People’s Movement of Guerrero (MPG), which brings together unions, peasants, human rights organizations, education students, and self-defense groups organized from 13 communities in the Regional Coordinator of Community Authorities (CRAC). The CRAC has recently mobilized, porting their arms, together with the teachers from Guerrero, adding new demands to the struggle.

If the Government attempts to use its force to impose its will on the teachers and attempts to repress the movement, it may very well lead to a social outburst since the so called “communal police” have declared they would return fire on the government forces. This is not the best scenario for a government that is looking to legitimize itself. Clearly, Peña Nieto is betting to wear out the teachers’ movement and achieve greater consensus for a repressive solution. However, this could encourage the mobilization of more sectors dissatisfied with the authoritarian PRI and the structural reforms being implemented by this government.

The teachers’ conflict becomes more important since it’s the only movement (with considerable force) directly facing the authoritarian PRI government and its allies of the PAN and the PRD in the reactionary "Agreement for Mexico" (Pactopor Mexico). Meanwhile the "opposition" of the National Union Workers is asking to be included in this bosses’ agreement.

If the combative teachers keep fighting and avoid falling into a legislation trap that would stop their struggle, they could defeat the government and initiate a process of restructuring that would put them in a better position to confront the SNTE leadership, particularly when the bureaucracy of SNTE, which was recently controlled by Elba Esther Gordillo´s mandates, is trying to restructure itself and win back its lost legitimacy.

In order to further strengthen the teachers movement it is necessary to unify the ranks and move forward in organizing a national strike that can clarify to the other sectors of the teachers union that the education reform can be stopped with independent politics along with their active mobilization.