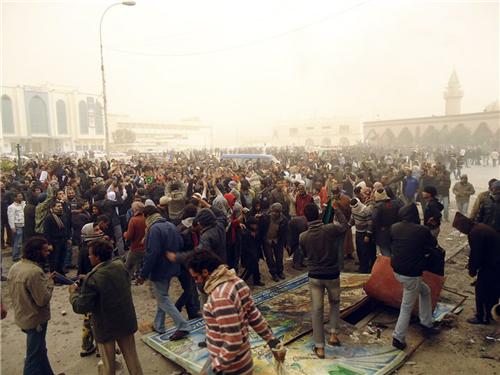 Today (Monday, February 21) the uprising of the Libyan masses established itself in Tripoli, the capital, after the masses, through an insurrection yesterday, seized Benghazi, the second city of the country, the heart of the revolutionary process underway. The power of the uprising got groups of the army to move to the side of the insurgents in Benghazi, as in Al Bayda. In Tripoli, while government buildings are being attacked, the security forces loyal to the Libyan leader are gathering in the symbolic places of the city, including the presidential palace. If the army is positioning itself defensively in the capital, where Qaddafi’s force is concentrated, this means that the loyalty of the Libyan armed forces and the survival of the regime are in question.

Inside the armed forces, the signs that the army would divide, are growing. The army command in Libya is marked not only by tribal relations, but with a long struggle for power between Qaddafi’s two sons, the "reformist" Seif al-Islam, who is confronted with the military leadership, and who is now trying to take charge of the situation, and Motasem Qaddafi, the National Security Adviser with close ties to the military elite. Moreover, this country has long been divided into two coastal areas with axes in Tripoli and Benghazi, because of which a geographic division among soldiers and the security forces could leave Tripoli unable to impose its control in the east.

Yesterday, Seif al-Islam, in his attempt to depose the protest, said that there were attempts to create several small Islamic emirates in various parts of the country. Today, the Italian Foreign Minister, Franco Frattini, echoing this biased propaganda, said, "I’m very concerned about the self-proclamation of the Islamic Emirate of Benghazi. Can you imagine having an Islamic Arab emirate on the borders of Europe? This would be a really serious threat.” In reality, what frightens these imperialists — that in the case of Italy have big petroleum investments in Libya, in addition to the fact that the Libyan sovereign investment fund, controlled by the Qaddafi family, is one of the main investors in big firms and banks of Italy, like ENI, the giant oil company and main industrial conglomerate, or UniCredit, the top Italian bank and one of biggest banks in Europe, not to mention football teams like Juventus — is that, in contrast to Tunisia and Egypt, the Libyan state is more fragile and vulnerable to collapse. The military, unlike in these two countries, does not appear to be in a position to throw out the Qaddafis and temporarily impose their own order, as a preventive way of stopping the breakup of the regime. The possibility of a workers’ and popular insurrection is inscribed in events, as well as the possibility of a civil war, even a chaotic situation without a clear governmental authority for a long period of time.

It would appear that the Arab Spring is not only spreading, but is also being radicalized and becoming more powerful, after the leap that Mubarak’s revolutionary fall signified, in Egypt, the strongest country of the region. For world imperialism and the European powers especially, that see their Mediterranean backyard moving in a revolutionary manner and entering a period of profound instability, things are becoming difficult.