Workers with job uncertainty go out to fight for their rights 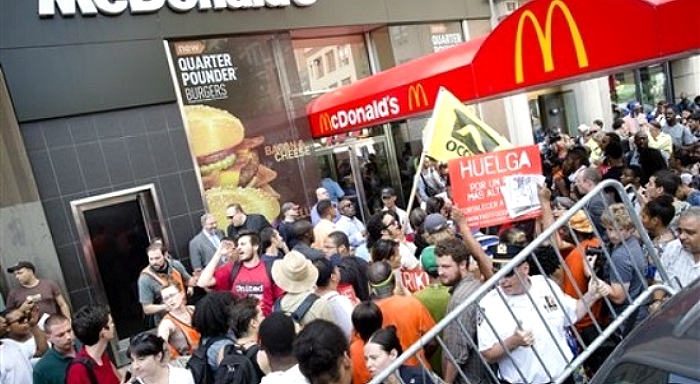 On Monday, July 29, the workers of the big fast food chains went out on strike, to demand a wage increase and labor and union rights. It is young people with job uncertainty, fed up with earning hunger wages, way below the average. The strike was national and affected the restaurants of McDonalds, Burger King, Wendy’s and others, in big cities like New York, Chicago, Detroit, Milwaukee, St Louis, Kansas City, Flint, Michigan. The restaurants had to be tended by supervisors and senior staff.

This strike is part of the Fast Food Forward campaign, that is demanding a minimum wage of $15/hour and the right to union representation, that began in New York, but has spread nationally. It is organized by activists from businesses that do not have unions and that have been trying to get organized for some time, in a country with a very low rate of unionization and very reactionary legislation, against the organizing of workers and the right to strike.

Fast food: An industry worth millions, that pays miserable wages

Numerous demonstrations, that brought together hundreds of workers, took place at the doors of these businesses. There was also a march in Times Square and Fifth Avenue in the heart of New York.

The fast food industry generates 200 billion dollars annually in the US, and its profits are based mainly on the cheap labor that they hire. It is calculated that there are 3 million employees in that industry throughout the country. Most of them are African-American or Latino young people, and they are completely subject to job uncertainty. They earn between 7 and 8 dollars an hour, a fourth of the national average. In one of the first protests that they had last year in New York, a female demonstrator said, “It is ridiculous that the multi-million dollar corporations have people like me, that work hard and have to depend on food stamps to survive” (El País, November 29, 2012). Their wages are so low that President Obama himself said that they would have to earn at least 9 dollars an hour. Meanwhile, the senior executives of the big chains make, on average, $25,000 a day!

Young people on the move

These activists have been inspired, partially, by the recent Occupy Wall Street (OWS) movement, which can be seen, for instance, in the use of the “call and response,” where all those who have gathered, repeat the words of the person speaking, to amplify the sound, and, in gathering support through the internet, they collected more than 120,000 signatures backing the Fast Food Forward campaign. The union bureaucracy of the AFL-CIO labor federation is going part of the way with these young activists, in order to conceal its own despicable policy, that has facilitated the anti-union stance of the big imperialist bosses in the US for decades.

Despite the limits of the movement, like the false consciousness that a substantial increase in their wages is going to boost consumption and improve the economy (in reality, the extremely low wages in certain industries are the basis of the functioning of the capitalist economy), it is an important process that is tending to organize the groups of young people with the most job uncertainty and get them in motion. Undoubtedly, this strike in the big US fast food chains, which has spread, is a new expression of the tendency to fight, that we are seeing in broad groups of young people, internationally, and that we have been reflecting in La Verdad Obrera, like the students in Chile, outraged young people in Spain, in Greece, the OWS movement in the US, or the 132 Movement in Mexico in 2012, or, recently, the students of Brazil, who led the biggest mobilizations in that country in decades.